links to general legal information for students and the public

The Supreme Court was established as the highest court in the land by the Constitution. It is the last court of appeal for civil and criminal cases, and it rules on the constitutionality of the laws passed by state legislatures and the U.S. Congress. Ben's Guide has this good basic overview of the Court's functions and responsibilities.

The official Supreme Court site is the place to go for background information such as justice biographies, historical material, and schedules. They also make current opinions available as well as a few years of historical opinions.

Larger databases of opinions, as well as other Supreme Court-related information, are available from these sources:

A useful reference encyclopedia, in the Library on the first floor:

The federal judiciary includes some specialized courts in addition to those discussed in the other boxes on this page. These include Bankruptcy Courts, Tax Courts, Court of International Trade, and others.

Cases and decisions from courts below the Courts of Appeals are often difficult to find online.

Remember that the Law Library has printed case law resources, as well as access to online collections not available in the Blume Library. Consult a Law Librarian for assistance.

You may also obtain some information directly from the courts. Use the Court Locator (see map at left) for contact information for the various federal courts.

US Courts of Appeals & District Courts

The heirarchy of federal courts proceeds down from the Supreme Court to Courts of Appeals, which cover multi-state regions, and then to District Courts, which cover states or portions of states.

The map below shows the geographical boundaries of the federal court system. Below the map are links to other resources. 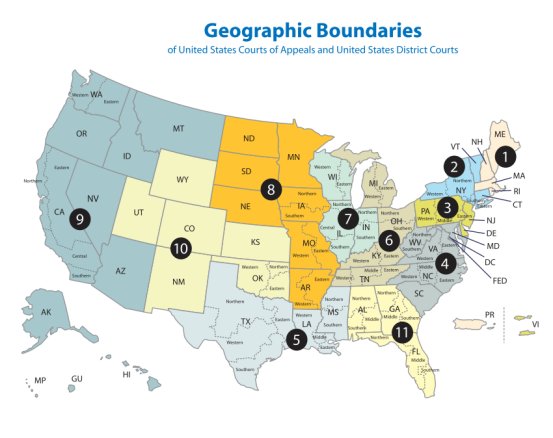