guide that describes major aspects of the Census, links to key online sources, and highlights print collections in the Blume Library

The Governments Division of the Census Bureau collects data via the Census of Governments, taken every 5 years, as well as through annual and quarterly surveys. Here are direct links to the data:

How much government operates in your area?

The more darkly-colored counties have more layers of government than the lighter ones. As you might expect, urban areas often have more government. But there are some surprises: look at sparsely populated Wyoming and North Dakota. 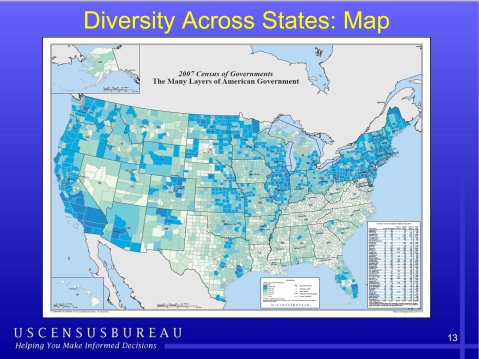 The Library's holdings of printed reports from the Census Bureau dealing with government activity are listed below. These series cover public sector employment at different levels.