describes Library holdings and major internet sources dealing with the operations of Congress, legislation, and regulation at the federal level

Legal Resources for Non-Law Students provides detailed links and some explanations of the federal, state, local, and international judicial systems and their records. It covers laws, courts, cases, and  the pesky topic of legal citations.

The Government Publishing Office is the major online source for relatively recent laws.

For older laws, you have to look for them in different places depending upon the year you need. The compilations into which Public Laws are gathered are called Statutes at Large. (See the In the Library box below for details on interpreting Statute citations.)

The Law Library Microform Consortium has digitized older Statutes and they are available through the Library Catalog.

To find a signing statement, include the phrase "Statement on Signing" with keywords from the law.

Finding laws is less complex than looking for bills. Once a law has been passed by both houses of Congress and signed by the President, there is only one version of it, with only one Public Law number associated with it.

This number is usually given in two parts, the first referring to the Congress number, the second to the sequential law number. For example, the Water Resources Development Act of 2000 is Public Law 106-541, the 541st law enacted in the 106th Congress. It's likely to be abbreviated as a citation like this: P.L. 106-541.

Having the law number is not as vital to an efficient search as it used to be, since the electronic sources provide keyword searching options. But it can still be the easiest way to find the precise bill or law that you need. Fortunately, bill and law numbers are often (but not always) given in textbooks, magazine articles, newsletters from lobbying groups, and reference books. The following sources in the Blume Library regularly describe legislation and are good places to look for summaries and numbers: 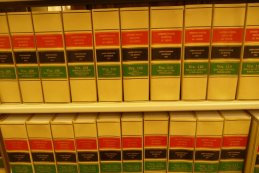 The Blume Library does not receive individual laws in paper format. However, authenticated electronic versions are available through the Library Catalog.

The Library also no longer holds printed copies of the Statutes at Large, which collect the individual laws for each Congress. The Law Library has a complete run of the Statutes, dating from 1789.

Statute at Large citations follow this form: [volume no.] Stat. [page no.]. For example, the citation for the law which renamed Washington National Airport "Ronald Reagan Washington National Airport" is 112 Stat. 3. Statutes at Large volumes have popular name and subject indexes, as well as numerical lists of laws, which make it easy to find a law even without the precise citation.

More about the U.S. Code

Every 5 years the U.S. Code is published. The Blume Library longer receives the printed Code, but the Law Library has not only the current edition but backfiles to 1976.

The Code summarizes the law in force. Summaries include references to the Statutes so that the full text of all laws can be found easily. The Code is

divided into "Titles" which are 50 broad subject areas.

Citations to the Code use this form: [title no.] USC [section no.]. For example, the section of the Code dealing with military promotions begins with Section 619 of Title 10: 10 USC 619.

There is a detailed subject index and a Popular Names Index at the end of the full Code set, which can help in finding the needed information without a citation. The Code is published one volume at a time. Supplements published in the interim between complete reissuances keep the set reasonably current.

But the most current versions are electronic.